What Happens During Sleep

Everyone has undoubtedly been told at some point in their life about the importance of sleep or that they need to sleep for nine hours every day. While many say such things, they only perceive sleeping as a time to rest– without truly understanding the sciences behind it. As modern society continues to expand its scientific knowledge, understanding what happens during sleep and its significance is essential for our wellbeing and daily lives.

REM and non-REM sleep: the four stages of sleep

Sleep is commonly divided into two types: non-REM (rapid eye movement) sleep and REM sleep. With both types combined, there are a total of four stages, three from non-REM sleep and the last from REM sleep. These four stages sum up to one cycle that repeats several times a night, with each lasting around 90 to 120 minutes.

As its name suggests, non-REM sleep is when there is little rapid eye movement and when the body builds bone and muscle, repairs and regenerates tissues, and strengthens the immune system. As one ages, they tend to experience less non-REM sleep. The first stage of non-REM sleep lasts five to ten minutes and everything in one's body begins to slow down, including eye movement and muscle activity. Next is the second stage of non-REM sleep, where one's body prepares to enter deep sleep. In this stage, eye movements stop, heart rate slows, body temperature decreases, brain waves get slower, and there is a mixture between periods of muscle contraction and relaxation. The last stage of non-REM sleep is the deepest stage of sleep, where the brain produces delta (slow) waves and there is absolutely no muscle activity. This stage is said to be difficult to wake up from and if one does, they are likely to feel "groggy and disoriented."

After the third stage of non-REM sleep is the REM sleep which only consists of one stage that begins briefly (ten minutes) but gets longer each sleep cycle. In this last stage, brain activity increases again and one experiences faster breathing, increased heart rate and blood pressure, and rapid eye movement. Moreover, major muscles are temporarily paralyzed in a condition called atonia, keeping the body from moving in response to dreams. People tend to have more intense dreams in this stage of sleep, due to the high brain activity similar to when one is awake. 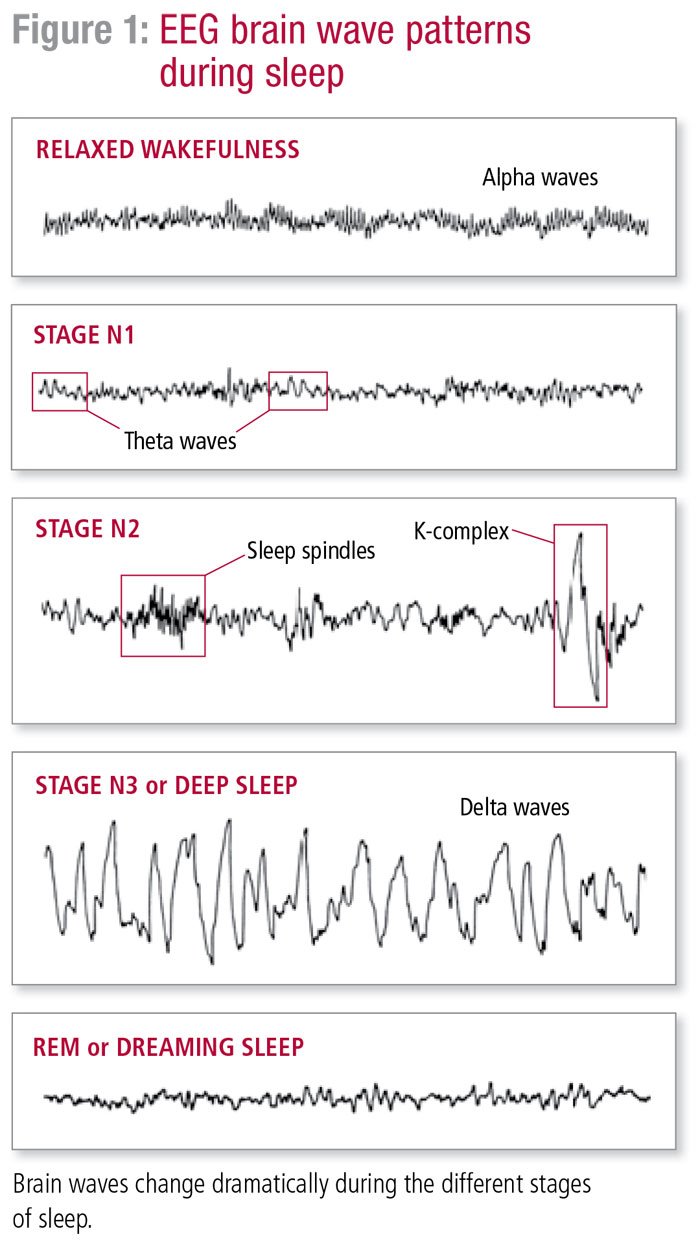 From the REM and non-REM cycle of sleep, it is evident that the brain is one of the most active parts of the body during sleep. As a matter of fact, there are countless electrical activities in the brain during sleep. Carl W. Bazil, MD, PhD, the Caitlin Tynan Doyle Professor of Neurology at Columbia University Medical Center, claims that the brain's nerve cells all rewire themselves, retaining and processing the new information from the day. This process of the brain "making new connections and breaking other ones" also enables many critical cognitive abilities such as memory consolidation.

Furthermore, what's more interesting is the brain wave patterns during sleep that are proven by electroencephalogram (EEG) tests. As the image shows, during each stage of sleep (N representing non-REM), there is a clear pattern in brain wave patterns, which are caused by the neurons in brains communicating with each other. To be specific, from normal wakefulness and consciousness to deep sleep, the brain waves shift from beta, alpha, theta, and delta, all representing different speeds and levels of Hertz or electrical pulses. These different brain waves are not only intriguing, but they also prove the many natural processes of the body during sleep. From these various stages and brain activity during sleep, it can be understood that sleep is not merely a time for the body to rest, but instead, a powerful and fascinating tool that supports basic human needs from within.

In recent years, there has been a downward trend in sleeping time and quality in all age ranges globally, and sleeping disorders including the inability to sleep (chronic insomnia) are becoming increasingly common. Moreover, sleep deprivation has been scientifically proven by many to be the cause of countless conditions including anxiety, chronic diseases, mood changes, poor concentration, weakened immune system, weight gain, and insulin resistance. While there is still much to explore in the science behind sleep, it is still undoubtedly a riveting concept behind the function of human beings. Hence, why not take a break from studying or working at times to appreciate and revel in the natural source of rest and amenity that our bodies have provided us with?

Nunez, Kirsten. “What Is the Purpose of Sleep?” Healthline, Healthline Media, 20 July 2020,

‌DiGiulio, Sarah. “What Happens in Your Body and Brain While You Sleep.” NBC News, NBC News, 10