Share to FacebookShare to TwitterShare to LinkedInShare to EmailPrint this page
RSS Feeds Subscribe to Alerts
Mummy Returns: Rediscovery
Yunji Chae ('27)
May 16 2022

As a student who likes to look into ancient cultures, I went to a mummy exhibition held at Tokyo’s National Museum of Nature and Science. This exhibition was connected to archeology and modern science, which was fascinating to look at. So I’m going to explain what I learned from this exhibition! 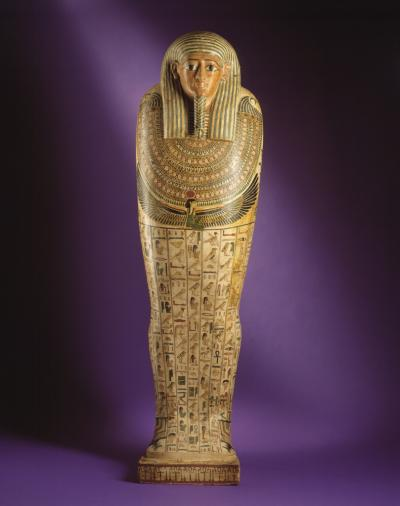 Scholars and experts have long been involved with the research and findings of mummies and their unwritten histories. A more detailed look into the processes and history surrounding them shows that there is a lot more to mummies than what simply makes the headlines. A mummy is a dead body of a human being whose tissues and organs are preserved. A mummy’s case physically protects it from animals or other intruders, but also spiritually by praising the afterlife. The process that forms the mummy in the coffin is called mummification. In the first step of mummification, the body needs to be washed and purified. s and experts have long been involved with the research and findings After that, every organ except for the heart is removed, believing it’s the center of a human being. The removed organs are then placed in separate jars called ‘canopic jars’. The body is then covered with salt which absorbs water from the body and prevents it from rotting. Finally, the dried mummy is given makeup and placed in its coffin.

As you can see in this picture, the lower section of a mummy is covered with hieroglyphic inscriptions and many ancient Egyptians' symbols of death and rebirth.  In the past, experts were only able to predict the Egyptians' lives off of the drawings on the coffin. For example, social level and wealth were shown by the number of coffins, and drawings represented the background and information about Egypt, such as the Egyptian god. However, to observe, the mummies had to be destroyed and torn down. But in our present day, we are able to gain more information by not tearing off the case but with CT scanners.

Scientists, writers, and even mummies themselves all help us to better understand the Egyptian mummification process, culture, and tradition. The mummification process as we know it is based on the books of early historian Herodutus, who wrote the process at 450 BCE. Continued until today, scientists and archeologists are adding on to this accomplishment with the use of CT scanners. A CT scanner is a computerized tomography scan that combines X-ray images pictured from different angles around the body and uses computers to process and create cross-sectional images of the bones, blood vessels and soft tissues inside. (Mayo Clinic, 2022) In the past, archeologists had never decided to unwrap them since mummies themself were so fragile. However, a CT scanner allows them to “digitally unwrap” the mummy without destroying the organized wrappings. By studying the x-rays, experts are able to go through the mummies’ designs more deeply than ever before. They became acquainted with what diseases they had suffered through and the treatments it took. Average height and life expectancies by studying their bones was also possible, and many facts were revealed due to CT scanners. The bones of mummies, CT scanners revealed, had one thing in common. Their teeth had usually 3 eliminated and decayed. This shows that ancient Egyptians had suffered from tooth diseases caused by hard, rocky foods and sweet snacks. Not only ancient diseases but also lifespans were told through teeth. Teeth revealed the age of each mummy, comparing whether it is a baby tooth or a permanent tooth. Adding on, the age of the ones with permanent teeth are predicted by tooth neck abrasion. The width of the hip bone told the mummy’s gender and their face bone revealed their appearance.

As a real-life experiment, Egyptian scientists had digitally unwrapped the pharaoh Amenhotep I’s mummy discovered in 1881.  According to the CT scan, Amenhotep I seemed to be approximately 35 years old and 169cm tall when he died. Amenhotep was identified to have had a narrow chin, a small narrow nose, curly hair, and mildly protruding upper teeth as well. Dr. Sahar Saleem, a professor of radiology, commented in an interview,

“This fact that Amenhotep I’s mummy had never been unwrapped in modern times gave us a unique opportunity: not just to study how he had originally been mummified and buried, but also how he had been treated and reburied twice, centuries after his death."

By digitally unwrapping the mummy and ‘peeling off’ its virtual layers - the face mask, the bandages, and the mummy itself - we could study this well-preserved pharaoh in unprecedented detail.” The development of technology gave us the opportunity to reveal the facts that were hidden inside the coffin.

Mummies are permanent beings that hold many ancient mysteries. Their ancestors gave us a mission to unsolve these mysteries and search for the results. As technology develops, we are now getting to unwrap the interesting facts digitally, without ruining the actual, elaborated piece. Through the clues our ancestors have given we are able to assume their height, appearance, accessories, diseases they had suffered, and much more.  Briefly, the mummies gave us valuable information about the ancient culture and sometimes plagues that were running around in the time era. We are able to observe the wisdom of life and ways to overcome some specific situations. It is wise how they protected their souls and memories in ancient times when there was a lack of supplies and knowledge. It is great how the ancients put efforts for 70 days, into creating a coffin to praise their emperor. Always remember, they are the ones who gifted this wonderful world, being the first to create native traditions and culture.