Provocations in the PYP

Provocations generally take place at the beginning of a unit of inquiry. Although sometimes there may be opportunities or needs to provoke students thinking throughout the unit of inquiry also.

So what is a provocation?

Some questions teachers use to plan provocations include:

Additionally, two key questions that teachers use to plan for how the provocation may be used as a pre-assessment tool include:

How are we assessing students’ prior knowledge, conceptual understandings and skills?

How are we using data and evidence of prior learning to inform planning?

What are some examples of provocations?

Central Idea: Our health can be influenced by the choices we make.

“We had a provocation to get things rolling. The children were asked their opinion on a sample lunch which consisted of potato chips, chocolate cake and a bottle of soda. We had some great reactions which showed us that the students have a general idea of what is healthy and unhealthy. We then looked at another sample lunch which consisted of rice with vegetables, fish, broccoli, natural yoghurt, a tangerine and water. The children agreed that this was a much better lunch!

We had another provocation today with pictures of food from the different food groups. The children were asked how they would sort these pictures. Some children thought they could have two groups, one with healthy food and the other with unhealthy food. Some other suggestions involved sorting the food according to colour or favourite food. The fruit and vegetable group was the easiest to sort, grains and protein were more challenging. We will continue to work on the food groups next week.

We also read The Very Hungry Caterpillar by Eric Carle. We had a good discussion about why the caterpillar had a stomach ache! Today we read two books: I like Pasta and I Like Ice Cream.”

Central Idea: Balance in our lives can promote health and well-being.

Students engaged with an EdPuzzle activity where they were given certain statements about well-being and they had to decide with a partner whether the statement was true or false. They had to explain their thinking behind their decision after conversing with their partner.

Some of the statements students had to decide were true or false included:

Here is an example of some of the students thinking for the statement, “People who meditate are healthier than people who don’t.” Teachers analyzed the answers to understand how to plan for further learning engagements based on the current knowledge of the students.

Central idea: People use symbolism in art to express complex and meaningful themes.

Ms Speirs, our art teacher, had collated a range of artworks that displayed various themes. Students were asked to group them into categories of themes they thought worked together and then were asked to explain their thinking.

Central Idea: Our identity and thinking can be influenced and expressed through the media.

We posted a call out through different social media platforms, asking volunteers to take a selfie and then record a 1 minute video clip discussing their identity, such as geographic origins, ethnicity, cultural background, interests/hobbies, passions, religion/spirituality and languages.

Teachers reflect on students’ prior knowledge, conceptual understandings and skills that have emerged throughout the provocation & self assessment and use this information to further plan for the units of inquiry.

Share to FacebookShare to TwitterShare to Google+Share to LinkedInShare to PinterestShare to EmailPrint this page
RSS Feeds Subscribe to Alerts
Morning Tea & PYP: The return to school (Virtual Parent Workshop)

Provocations in the PYP

Provocations generally take place at the beginning of a unit of inquiry. Although sometimes there may be opportunities or needs to provoke students thinking throughout the unit of inquiry also.

Students in Grade 5A have been exploring a student led inquiry in action!

Collaboration for learning across the school - Grade 4 & Grade 12 - Symbolism in Art
Play within the PYP!

This week our PE teacher, Rachel Grantham, and PYP coordinator, Serrin Smyth, facilitated a workshop for Kindergarten and Grade 1 teachers which looked at the role of play within the PYP.

A focus on Learning to Learn!

Exhibition Information Evening for parents and students was hosted on Friday 14th February 2020.

On Friday 14th February, our Morning Tea & PYP workshop focused on how we can support children in their development of Reading.

What does transdisciplinary learning and grade level collaboration look like at Seisen International School?

What does transdisciplinary learning and grade level collaboration look like at Seisen International School?

Welcome back to school!

Christmas Parties and a visit from Santa!
Parenting in a Digital Age in the Elementary School

This week we hosted a workshop focusing on Parenting in a Digital Age.

On Friday 15th November, parents explored how they can support children in the development of the 'Approaches to Learning', specifically focusing on social skills and self management skills.

SOLO and Vocabulary Lists Updated for Grade 1 to 6

An update of the new SOLO Taxonomy for current and year long units of inquiry and vocabulary lists to support your child at home.

On the 16th October we hosted our first Morning Tea & PYP Parent Workshop.

On Friday 27th September, our EAL teachers Ms Ingrid and Ms Katie facilitated a Parent Workshop about WIDA assessment, how the program runs and how to support your child at home with English development.

This post provides a summary of the possible assessment criteria for each Grade Level's Unit of Inquiry.

Inquiry in the Enhanced PYP

How the students and teachers are engaging with the enhancements of the PYP. Through a self-reflection activity on the dispositions of inquiry teachers and inquiry students we acknowledge strengths and set goals.

Grade Five & Six Activities off to a FUN start!

A PYP Coffee Morning to demonstrate how we are unpacking the Approaches to Learning (ATLs) in the Enhanced PYP.

Come and read how our House Captains have been displaying their leadership skills over the past few weeks.

This post provides a brief summary of each of the homeroom's current unit of inquiry.  To access detailed information on the inquiry questions, learning outcomes and vocabulary lists for each of the units, please click on the links, below.

The Launch of the Enhanced PYP

Read about the new Enhancements to the PYP framework and how we explored some of the big changes during our PYP Coffee Morning.

An overview for parents to view all the learning outcomes from all subject areas during the first semester.

Come and read about the new PYP Units of inquiry in the elementary school!  You can download the learning outcomes for each unit and view how the inquiries may develop over the coming weeks.

In a PYP School everyone has to be a learner.

Sports, service and songs. It has been a busy week in Elementary.

An Introduction to Grade One

Today we welcomed parents whose daughters will be starting in first grade next August. We talked about teaching and learning in grade 1 and explored the PYP framework together. 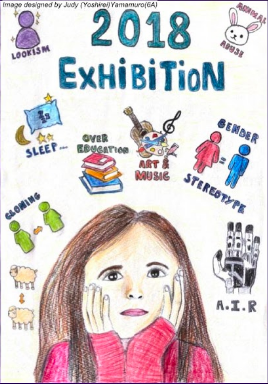 With just one week to go until the big night, read how students are putting together the final touches of the different PYP Exhibition Components. On Friday 6th April we held a second MAP Testing Coffee Morning.  This session focused on how to interpret the Winter Progress Report and indications of growth since Fall. 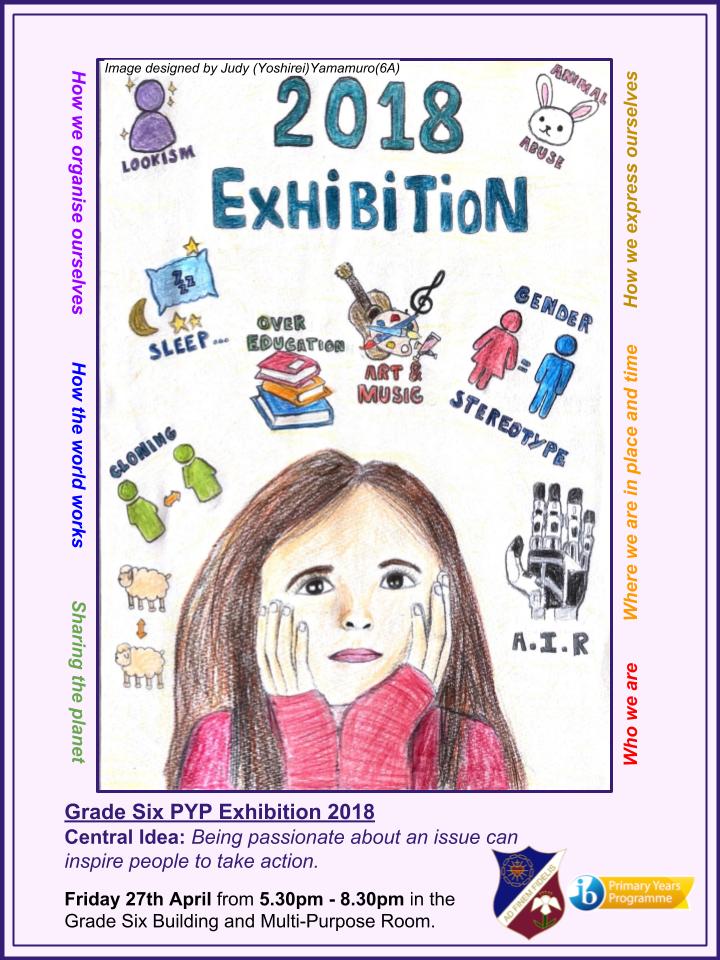 Please consider supporting our PYP Exhibition students by filling out a short survey.  This will enable them to collect and interpret data from a large sample size. 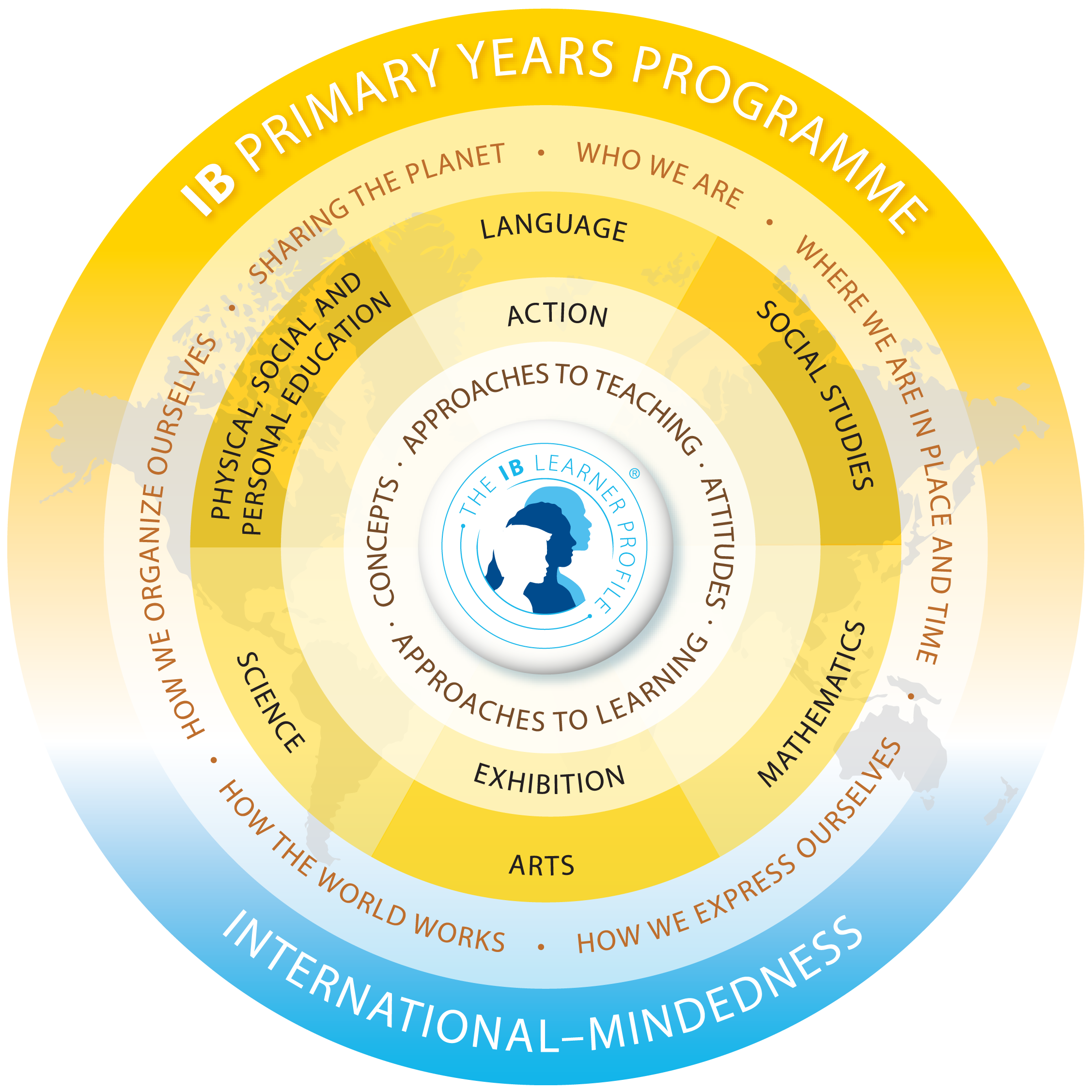 The penultimate units of inquiry of the school year will begin after the holidays.  Click here to find out what your daughter will be inquiring into.  It may even give you some ideas for day-trips during the Spring Break so you can help support your daughter's learning! 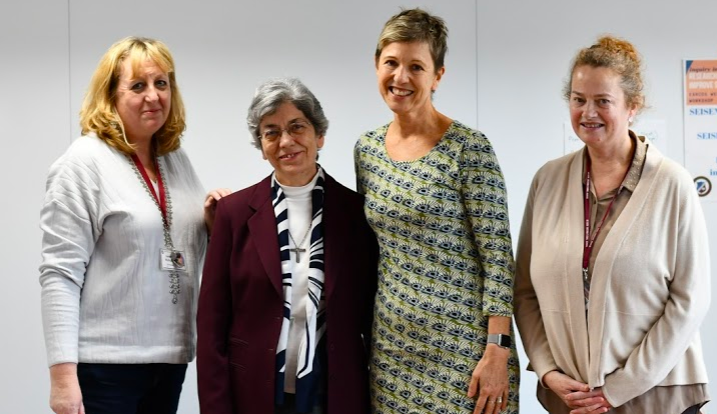 An Inquiry Approach to Teaching and Learning in Mathematics

Our teachers are lifelong learners!  Read how they spent their weekend inquiring into effective teaching and learning strategies in mathematics. 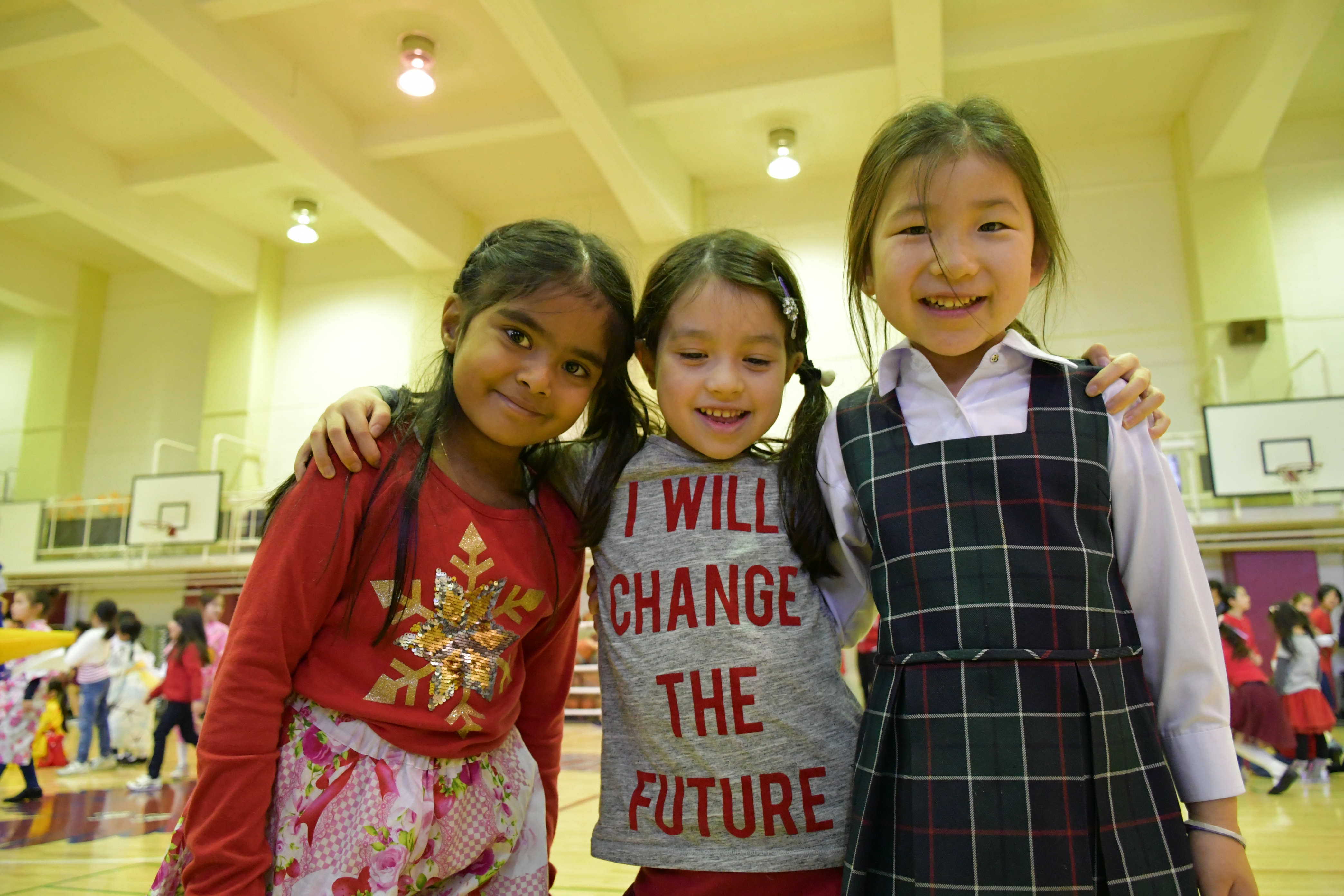 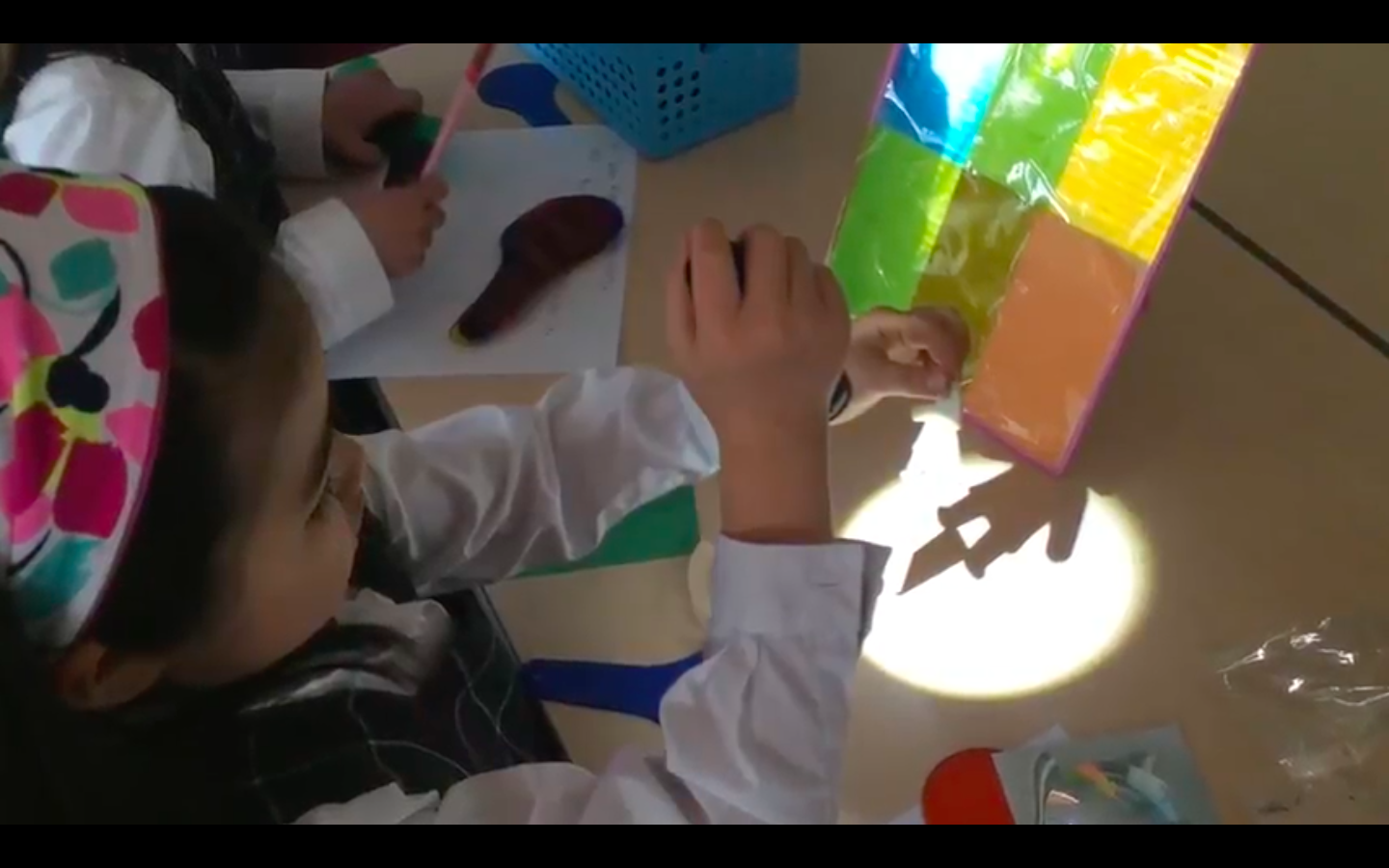 New Units of Inquiry with a Science Focus

Read about the upcoming units of inquiry which all have a scientific inquiry focus.  This post contains links to the unit learning outcomes to help you support your daughter. 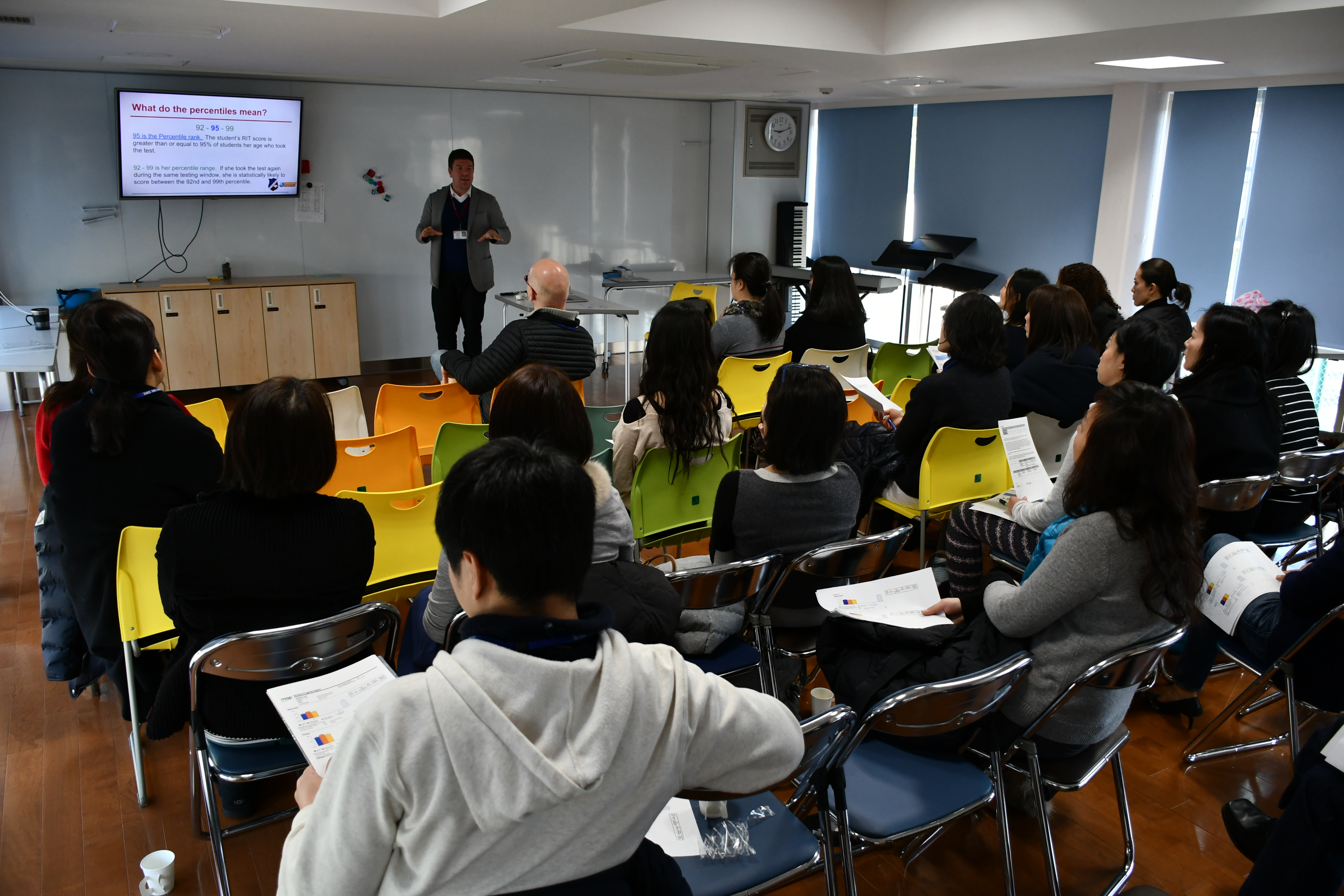 An overview of some of the qualitative and quantitative assessments used in the elementary school to determine students' levels of achievement and to identify next steps in learning. 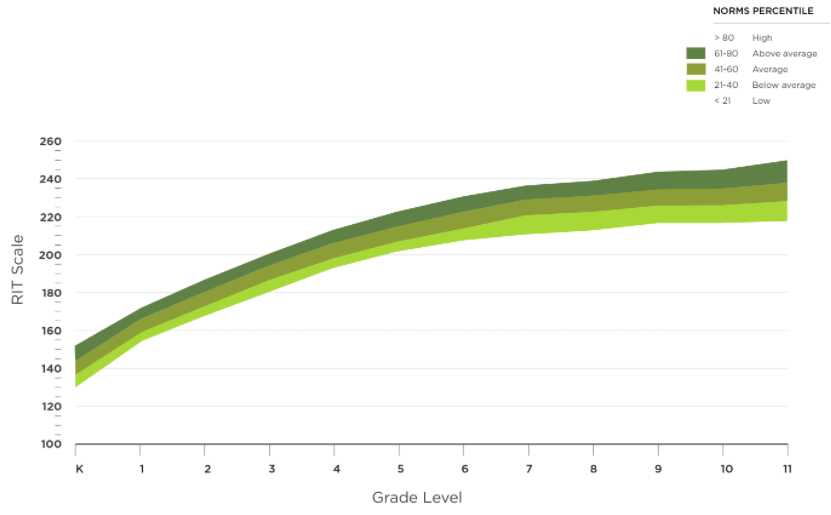 What to expect with your daughter's report card

Read what to expect when your daughter's Progress Report is sent home on Wednesday, and how to interpret the MAP data which will accompany the report. 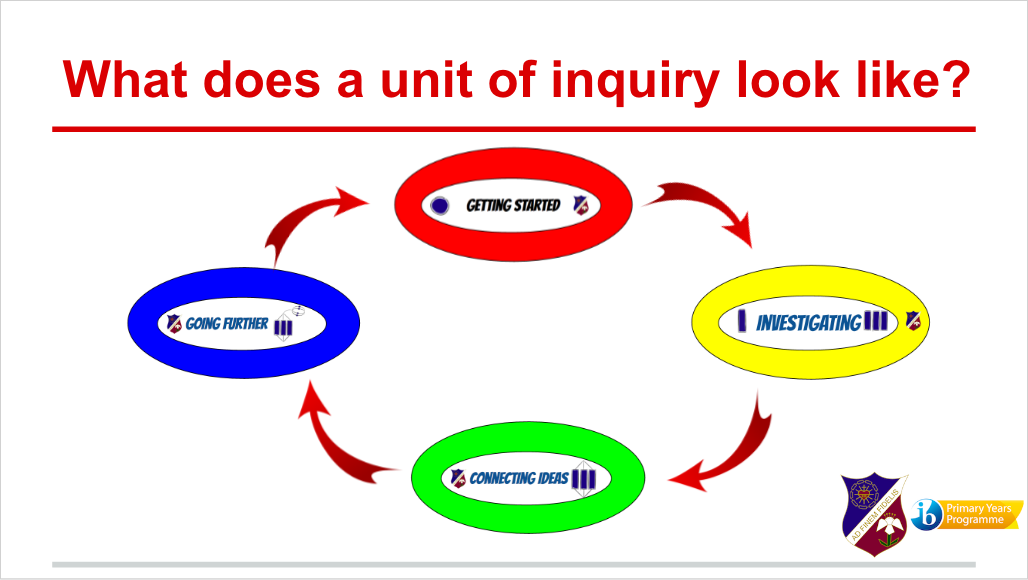 A brief summary of the current homeroom units of inquiry, along with detailed learning progressions and vocabulary lists for each unit to help you support your daughter's learning. 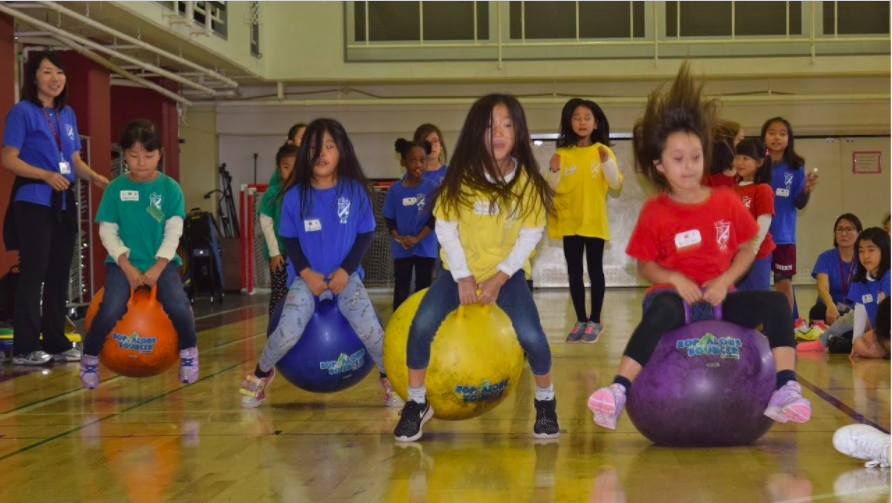 Read about our annual House Day, held at the school and Kinuta Park on Monday November 6th. 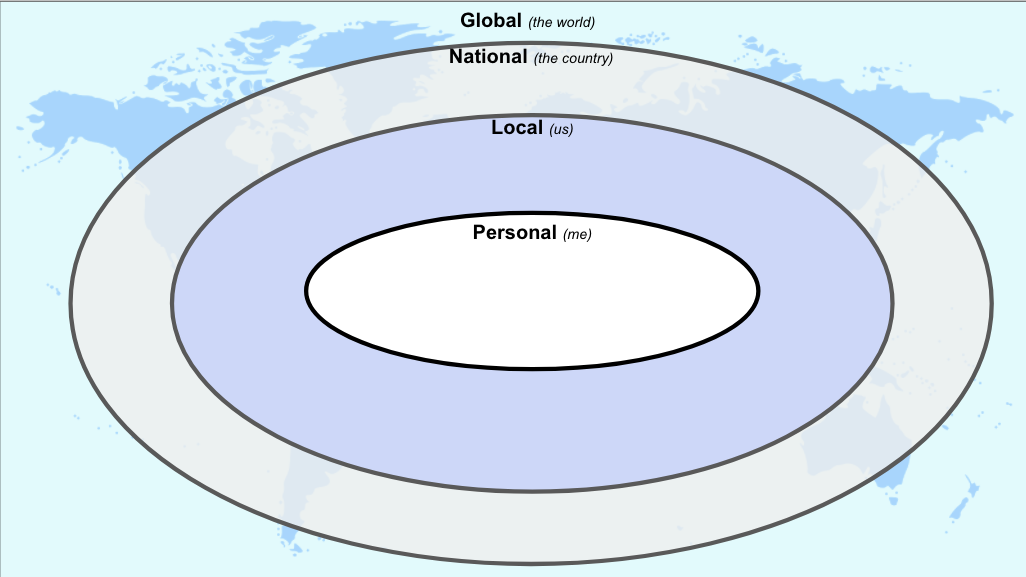 A summary of our first PYP Coffee Morning of the year on how to develop a Global Minded community. 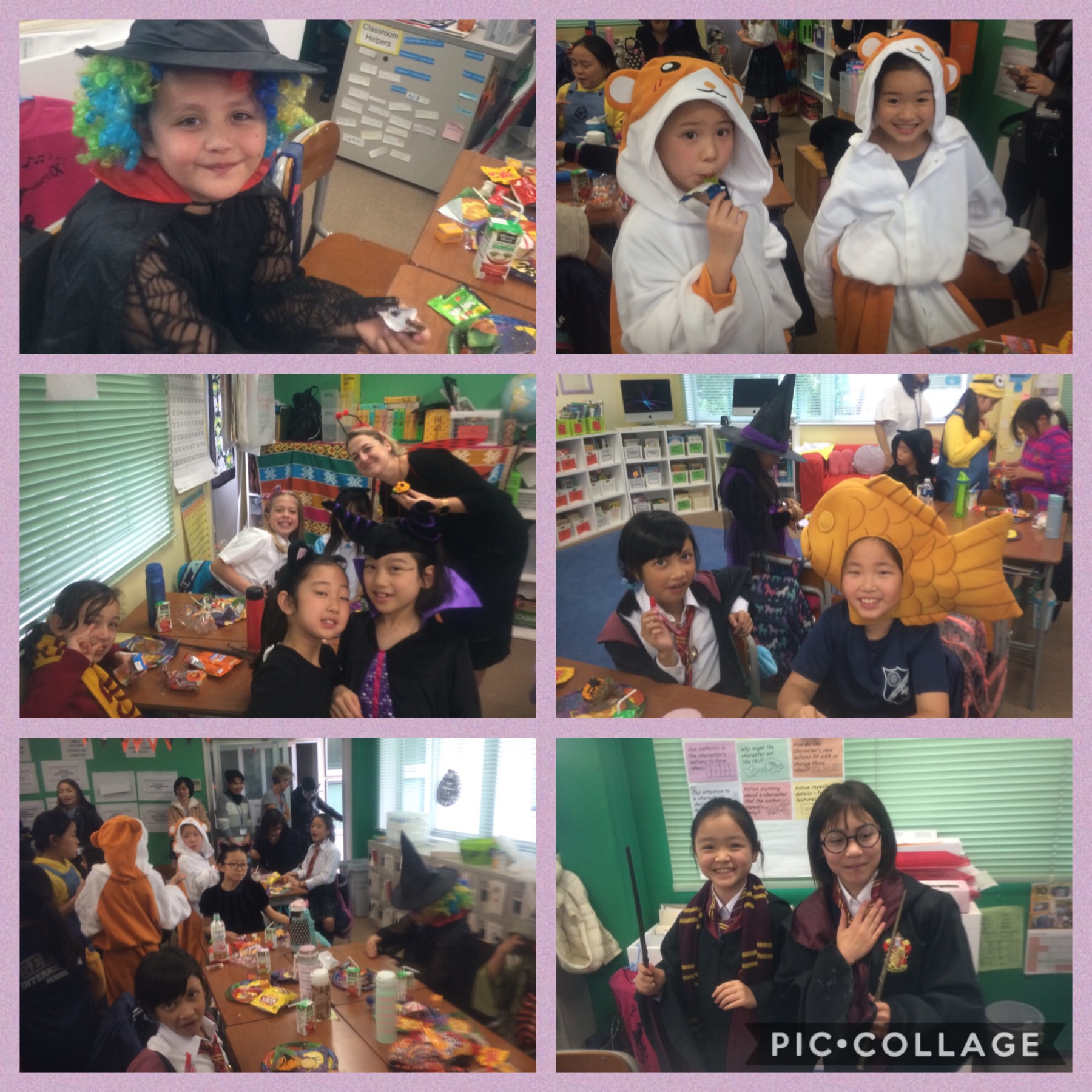 A great afternoon of "treat or treat" in the Elementary!