The foreign language program at Seisen is a challenging and empowering program. Together students and faculty engage in a deepening understanding of different cultures and fluency in languages. The school currently offers Japanese, French, and Spanish. The program encourages language learners to embrace other cultures and to apply their language skills in the classroom setting and beyond.

Seisen is an international school where students are encouraged to develop global mindedness. Here, students acquire foreign language skills with the understanding that language is a life-long tool for communicating with and impacting the world community. Seisen emphasizes foreign languages and cultural awareness as a life-long vehicle for community-building, peace, justice, and equity.

The program includes language and cultural visits to our sister schools in Japan and has also included visits to Spain and France.

Seisen offer Spanish as a second language from Grade 5 to 12. The school has adopted the European Council Common European Framework as a reference for Spanish language.

The students have the opportunity to prepare for Spanish Language Proficiency tests DELE (Diplomas of Spanish as a Foreign Language). The students could take the A1 level in Grade 8 and A2 level in Grade 10. From Grade 11, students are able to use Spanish as either an acquired language (B) or a native language (A) to earn credit towards the IB Diploma.

French is offered as a second language from Grade 7, following the European Council Common European Framework. Students prepare for French Language Proficiency tests DELF (Diplomas of French as a Foreign Language). From grade 11, students are able to pursue French as an acquired language (B) to earn credit towards the IB Diploma. Students can also take IB Diploma exams in French language and literature (A).

Japanese language and culture is taught throughout the school from first grade. Grades 1 to 6 have two or three levels. Grades 7-10 have four levels. In 11 and 12 Japanese is taught at five levels: Ab initio (beginners), B SL, B HL, A1 SL and A1 HL. Native classes from grades 1 to 10 follow the curriculum of the Japanese Ministry of Education. As a result, students who complete the A1 SL and HL programs are qualified to enter Japanese universities. They also earn an IB Bilingual Diploma. The Japanese Department sponsors the Japanese Kanji Aptitude Test (Nihon Kanji Noryoku Kentei). The Japanese program also includes a Grade 3 exchange with a local elementary school, a Grade 4 orange picking with the Kamakura Seisen school, and the Grade 9 Nagano Seisen exchange.

Students are also encouraged to study their mother tongue for IB exam credit. The school understands that a student’s mother tongue or home language is culturally important, that it is often the language of first thinking, and that further language learning takes place often after, or along side, a mother tongue. In past years, students have worked with tutors and parents to further study literature in their native Chinese, Danish, Dutch, German, French, Japanese, Korean, and Spanish languages at various levels for the IB diploma or college credit. Mother tongue maintenance is encouraged for all languages. 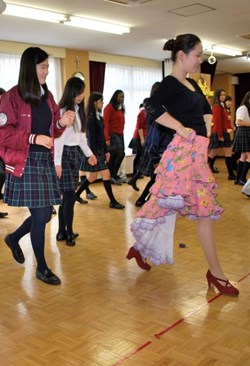